In stock
SKU #
4020003
MFG #
T100-12
$2.99
Save Item Saved Add to Compare
Does Not Ship To:
CA
WARNING: This product can expose you to chemicals including lead or lead compounds, which are known to the State of California to cause cancer and birth defects or other reproductive harm. For more information regarding Prop 65, visit www.P65Warnings.ca.gov
Calculate Estimated Shipping
Skip to the end of the images gallery 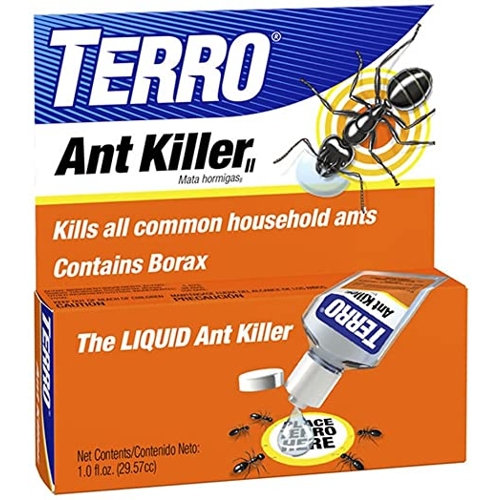 Quickly and easily kill pesky ants with this Terro T100-12 1 oz. liquid ant killer! This liquid ant killer attracts and kills all common household ants. Worker ants deliver a lethal dose of borax to the rest of the colony, killing both the ants you see and the ants you don't. To use, apply the product to cardboard tiles and place where ants are seen. It comes with nine cardboard squares to use for product placement. The more bait placements, the better your results will be. Use this liquid ant killer along baseboards, under cabinets, and near entry points. Since this product is a bait, you will first see more ants as they will be attracted to the bait, but then the ants will start to disappear!

For more than a century, Terro has been the trusted name in insect control. Based in Lititz, Pennsylvania, the insect control company continuously strives to manufacture quality products targeted to meet the varying needs of the consumer. Today, their portfolio includes liquid ant killer, aerosol sprays, perimeter treatments and other products for your business.

The ant killer is specifically designed – using the active ingredient Borax- to provide fast-acting elimination of the ants you see and the ants you don't.

Contact killers, on the other hand, kill insects immediately, can be applied as a spot treatment and provides residual protection.

How Does It Work?

TERRO Ant Killer is a bait product, so at first ants will come in large numbers, but they will soon disappear. The product is specifically formulated to allow worker ants to consume the product and survive long enough to carry the liquid back to the nest and deliver a dose to the rest of the colony.

Leave the product undisturbed while the ants are actively feeding on it and be sure to eliminate all other food sources in the area. This will ensure that the ants aren't tempted to eat anything but the deadly liquid ant killer.

Baiting enables you to get rid of both the ants you see and the ants you don't! While the active ingredient in the bait will ultimately kill the worker ant, it interferes with the ant's digestive system and works slowly enough that the worker has time to get back and share the ant bait with the rest of the colony. This slow kill is needed to allow time for the foraging ants to make several trips to the bait and deliver enough bait to the rest of the colony.

How To Use TERRO Ant Killer

Tear the 'Place TERRO Here' cardboard squares from the ant killer packaging along the perforated lines and simply apply the product directly from the bottle onto the square. Small pieces of paper, cardboard, or foil also may be substituted.

The key to effectively eliminating the ant infestation is to monitor the placements and ensure there is always a fresh supply of TERRO Ant Killer for the ants to feast on. Depending on the size of the ant invasion, complete control may take up to two weeks.

The More Bait Placements, the Better

Place the product where ants are seen, such as the edges of sinks, tubs, window sills, under food cabinets, along floors and baseboards and in corners. Do not skimp on bait placements; the more bait placements, the better.

Q: I just placed several squares of TERRO Ant Killer in my kitchen and it's attracting more ants, not killing them! What's going on?

A: You have nothing to worry about! Initially, you will see more ants. As ant foragers look for food, they are attracted to the sweet liquid in the bait which they consume and carry back to feed to the rest of the colony. On the way back to the nest, the ants drop what it called a 'trail pheromone', letting the other ants know where the tasty food supply is. In turn, these ants follow the trail to the bait which explains why you initially see more ants

Q: I've been using TERRO; Ant Killer for the past few days. When should I remove the bait stations?

A: We recommend leaving the bait out for three to four days after signs of ant activity diminish. If no more ants appear, remove the bait, relax and enjoy being ant-free!

Q: The ants in my kitchen are avoiding the TERRO Ant Killer – can you explain why?

A: As long as the bait is in liquid form (has not hardened or thickened) it should be effective because the active ingredient does not diminish over time. The ants may have found another food source, by seeking a grease-based vs. sugar-based food, or be in the breeding cycle of their colony and not interested in eating.

Q: How long does it take to eliminate an ant colony with TERRO Ant Killer?

A: The ants consume large quantities of the bait and then return to the nest and share it with the rest of the colony, killing the ants you see and the ants you don't! This process can take from just a couple days to several weeks, depending on the size of the colony. Each ant that consumes the bait will die within 24 - 48 hours. It is important to leave the bait as undisturbed as possible while the ants are actively feeding on it. You should replace it only if it becomes inaccessible to the ants, or empty.