Lowrance HOOK² 5 with SplitShot Transducer and US Inland Maps

Be the first to review this product
Out of stock
SKU #
740055
MFG #
000-14281-001
$199.88
Oops ~ Sold Out
Save Item Saved
WARNING: This product can expose you to chemicals including lead or lead compounds, which are known to the State of California to cause cancer and birth defects or other reproductive harm. For more information regarding Prop 65, visit www.P65Warnings.ca.gov
Skip to the end of the images gallery 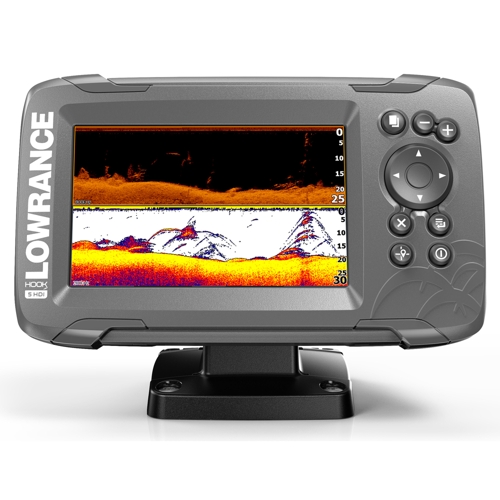 The world’s easiest fish finder, HOOK² 5 Split Shot helps you have a more enjoyable day on the water by removing the hassle of making adjustments with a simple menu layout, easy access to key features and game-changing Lowrance® Autotuning sonar.

You will be free to focus on fishing with Autotuning sonar, a new feature that actively adjusts sonar settings as fishing conditions change. You just fish and let HOOK² take care of sonar performance – performance powered by SplitShot 2-in-1 sonar.

Returning to your favorite fishing spot or finding a new one is easy with the navigation features in HOOK2, including a built-in, high-detail US map with 1-foot contours of more than 3,000 lakes.